IT’S A WRAP! An engaging insight into the journey of a classic wrap silhouette… 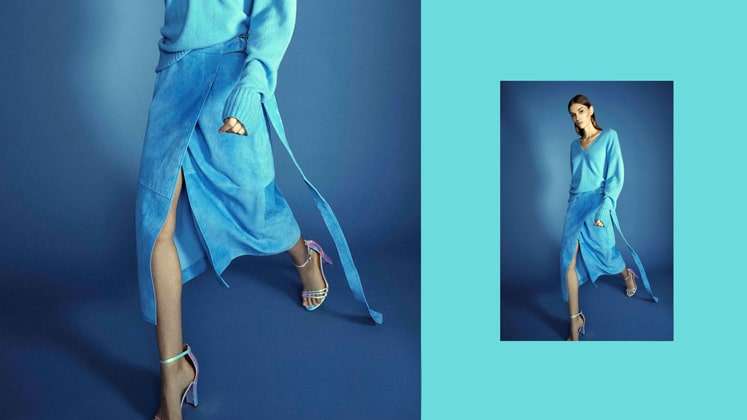 Fashion in the 1970s was an amalgamation of the colourful, bold and daring. Besides leisure suits, oversized collars, metallics, polyester pants and crop tops, the era gifted us with several trends that are still chic and relevant in today’s world of fashion, such as the wrap silhouette. It was Diane von Furstenberg who created this signature piece in the so-called swinging ’70s that has withstood the test of the time. Over the years, while the wrap dress has certainly evolved in graphics, prints, patterns, sequins and several other materials, the wrap phenomenon has simultaneously been adopted by other product categories too, such as skirts, skorts, tops, shrugs and coats. While many are incorporating the wrap quite literally, there are a few forward thinkers who choose to fringe on the trend in new and innovative ways… 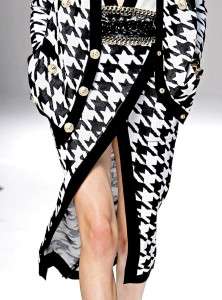 When the wrap dress was introduced, it was originally tied at the waist with a belt and was constructed in drip-dry, cotton jersey. But the dress design, in its fifth running decade, has come a long way since then. Looking at the S/S’14 runways, DVN, the original master herself, presented a teal coloured wrap dress with heavy embroidery and a lace border; whereas, Daks and Lanvin sent out wrap coat dresses in gabardine and leather. Creating a hybrid, Donna Karan and Preen by Thornton Bregazzi did not secure the wrap on the side but only halfway at the front, leaving enough room for a front slit. They also did away with the rope belt that is tied and instead, attached half belts on the side which looked like separate accessories. Keeping these modifications in mind, Indus Valley Exports has kept pace with the trend over the years. “This is one trend we never skip, we always do wrap dresses in our collections,” shares Pramod Rathore, Proprietor of the company. 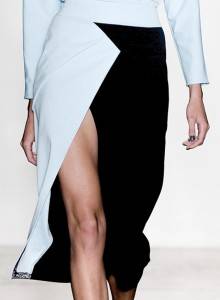 Coming to the widely popular trend to hit the runways of last season, the slit wrap skirt and its less familiar cousin, the wrap skort (shorts within a skirt) are the perfect piece to welcome spring. Typically with pointy, downward-facing hems, the wrap skirts have been showing up in a gamut of great iterations, while Burberry Prorsum, Emilio Pucci and Missoni went for a sarong style in solids; others like Balmain, David Koma and JW Anderson chose stiffer fabrics for shaper looks in houndstooth and stripes and conversely, softer fabrics were transformed into wrap slits by Peter Som, Jean-Pierre Braganza and Costello Tagliapietra. Sunil Jain, DGM (Fabrics), Maya Exports Corporation describes the short ones in his collection as being with and without the slit in rayon and other lightweight fine knits. “We are using washing techniques like stone wash and resin at the moment, along with floral, star, polka dot, pindot, paisley and stripes print to accentuate the wrap,” says Sunil. Talking about value addition, Sunil confirms that Jason Wu’s beaded slit skirt in the 90’s was quite an inspiration, and the product development team has used lace, handwork, computer embroidery and schiffli embroidery to make the skirts standout.

Indian exporters have used different techniques and value additions to give individual flavour to the broad trend. Alka Bhatnagar, CEO, DPI Fashions also uses ornamentation by attaching jacquard on the waistline and the hem of her cotton voile skirts, in addition to heavy beads on the rope belts, sequin and appliqué work on the body of the skirt. DPI Fashions is working on three variations of a wrap skirt, one being a round one with soft gathers, the second, a stylish version comprising of a long side slit and the third being a reversible wrap around skirt. “We are working on these reversible versions in lightweight cotton which consist of two different fabrics and two different prints on both the sides of the skirt, so it can be worn both ways and on more occasions,” informs Alka. Wrap shirts, though not very new, are also an interesting segment that both, Alka and Sunil confirm to be producing. “We just started doing wrap shirts in prints and cotton gauze fabric; you can team up with wrap skirts. They can be tied at the side as well as at the back,” adds Alka. In outerwear for spring, the classic silhouette re-emerged in the form of wrap coats where designers like Celine and Paul & Joe used exaggerated shawl collars and Hermes and Helmut Lang chose to go with collarless versions. Others such as BCBG Max Azria and Guy-Laroche simply belted or cinched theirs’ at the waist and went for gabardine and polyamide fabric.

Despite oversized outerwear still being a key trend at A/W’14-15 runways, the style was tweaked and is one of the more sophisticated trends from the season which witnessed designers like Stella McCartney creating double breasted wrap coats and using zippers to render the silhouette with shape. While the wrap coat seems to be untapped by most exporters till now, there are a few who are incorporating the wrap effect in their knits through shrugs, Akshay Dhanda, Vice President, Orient Craft Sweaters Ltd . informs, “We are working on lots of different wrap shrugs right now which are primarily in lightweight cottons and are in a multitude of colours – from the basics like beiges, greys and monochromes to brighter hues in corals.” Bordering on the periphery of the trend and placing it in originally on wrap tops is Aditya Singhania, Owner, Intercity Traders . “We have used the overlapping feature of the wrap and incorporated it in our silhouettes, so it’s not exactly a wrap per se since it is already stitched within the garment,” avers Aditya. Catering only to the high street, Intercity Traders is constructing these tops in lightweights such as georgettes and crepes and playing mostly with solids. Looking at how the wrap garment always seems to find a place in each season’s collections is a clear indicator of its versatile, timeless and fashionable nature. “The wrap silhouette is going to pick up further, I believe, it will be much bigger next season,” predicts Aditya, based on buyer feedback for his wrap inspired collection.